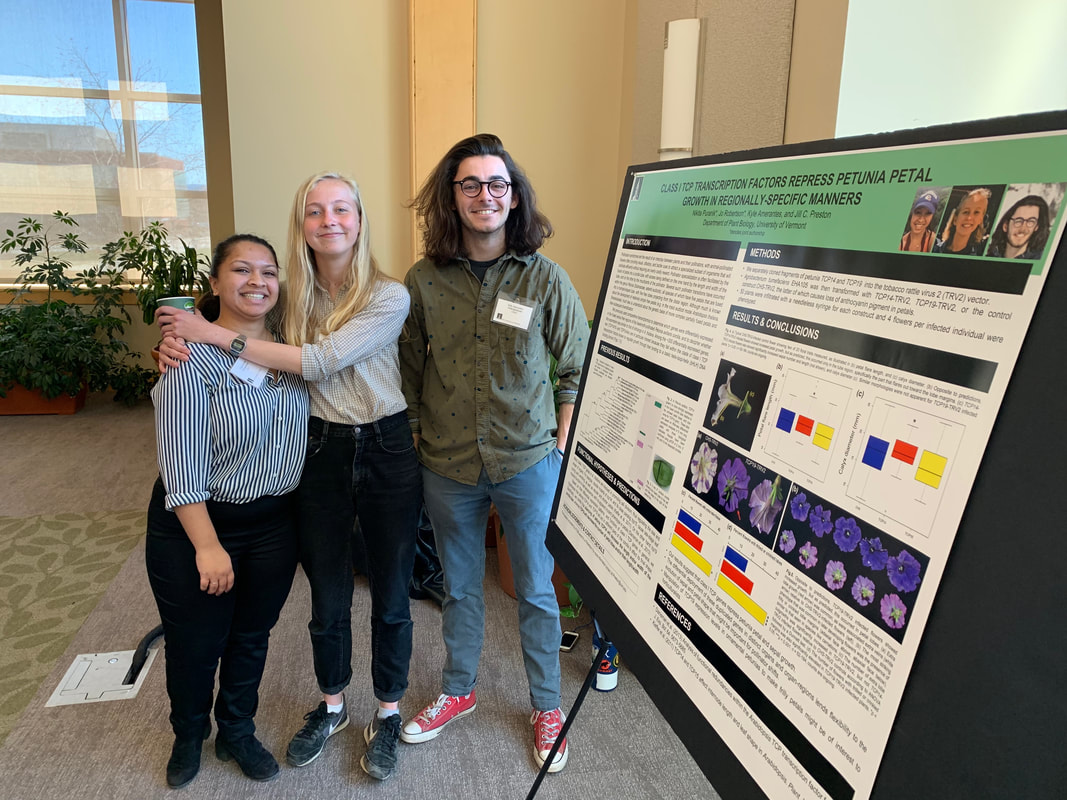 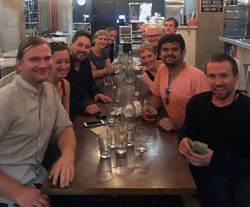 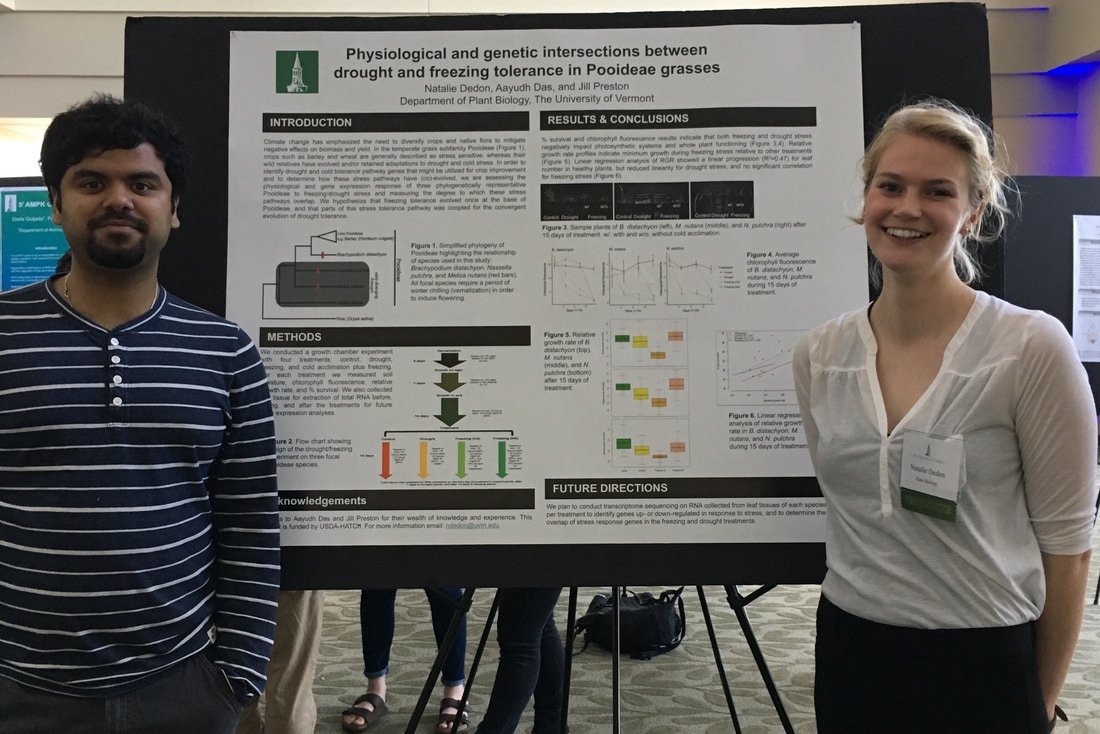 Natalie Dedon (right) presented her work (mentored by graduate student Aayudh Das; left) on the evolutionary relationship between drought and cold stress in Pooideae grass at UVM's student research symposium. We're looking forward to further interesting results over the summer. Thanks for the hard work Natalie!

Writing retreat on the evolution of VRN2/CO9 genes, March 2017

Siri Fjellheim invited Jill to a writing retreat in NYC to write-up Siri's sabbatical work on the evolution of VRN2/CO9-like genes and their role in photoperiod-mediated flowering. Here we are after a very productive couple of days; highly recommended format for finishing manuscripts.

Congratulations to Meghan for a successful PhD thesis defense! 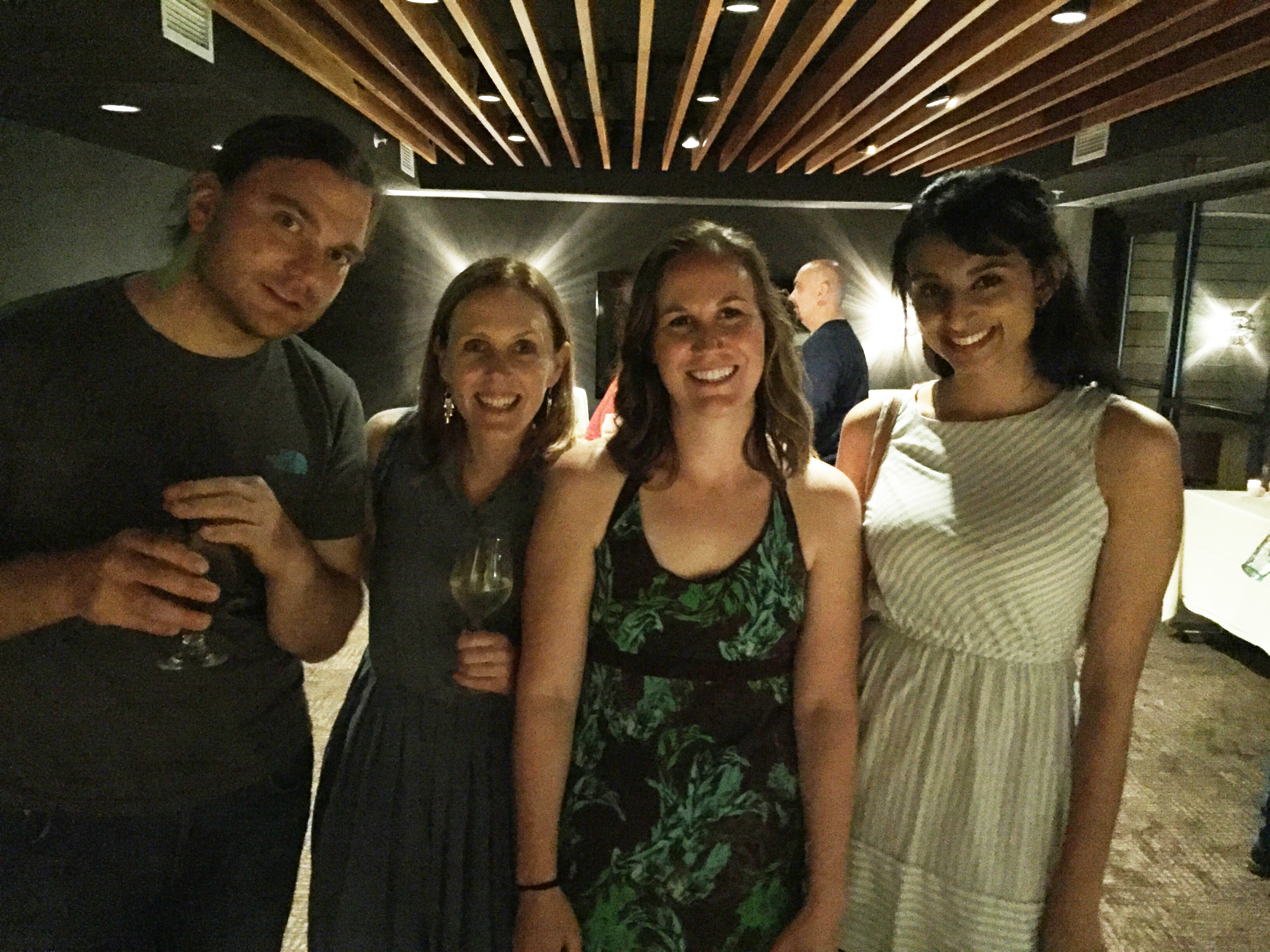 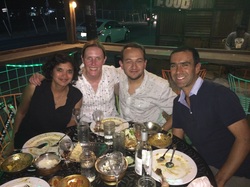 Talking science with friends and colleagues at Evolution 2016 in Austin, Texas. It was hot, but worth it for the talks on evolutionary physiology, phenotypic plasticity, and methods for testing trait convergence. Left to right: Seema Sheth (UC Berkeley), Jill Preston (UVM), Felipe Zapata (UCLA), and Daniel Cadena (Universidad de Los Andes - Colombia).

Well done to Jinshun who was invited to give a talk at the 37th New Phytologist Symposium on Plant Developmental Evolution. His paper should be along shortly pending minor revisions in Plant Biology. Nice job!

Summer 2015 in the Preston lab 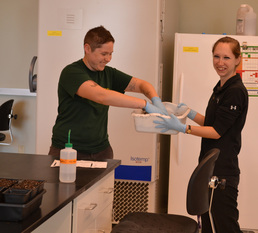 It was a busy summer in the Preston lab. We had two visitors, Jamie Kostyun (right, doing VIGS with Beck Powers) from Leonie Moyle's lab at Indiana University working on Jaltomata development, and Siri Fjeillheim from the Norwegian University of Life Sciences working on the evolution of ﻿﻿CONSTANS ﻿﻿genes in pooid grasses. Siri will be on sabbatical in the lab until the end of December. The lab also hosted two undergrads. Alfonso Poires is working with Jinshun to determine the number of origins of vernalization responsiveness in pooid grasses, and Kayla Sturtevant has started a project to see the effect of gibberellic acid on bristle grass morphology in collaboration with Andrew Doust (Oklahoma State University).

Mechanisms underlying the evolution of petal fusion: May 2015

Jinshun and Jill's paper on the developmental and genetic bases of petal fusion evolution has been accepted as a Tansley Insights Review in New Phytologist.

Sarah just received an award for Excellence in Undergraduate Research from the Department of Plant Biology based on her work in the Preston lab. She has finished all her classes at UVM and will pick up a few more credits this summer before officially graduating. We will miss her stellar efforts in the lab, but know she has a bright future ahead of her in medicine and medical research. Good luck Sarah!

Jill attended the first annual meeting of the "Emperors of the Sun" project: April '15 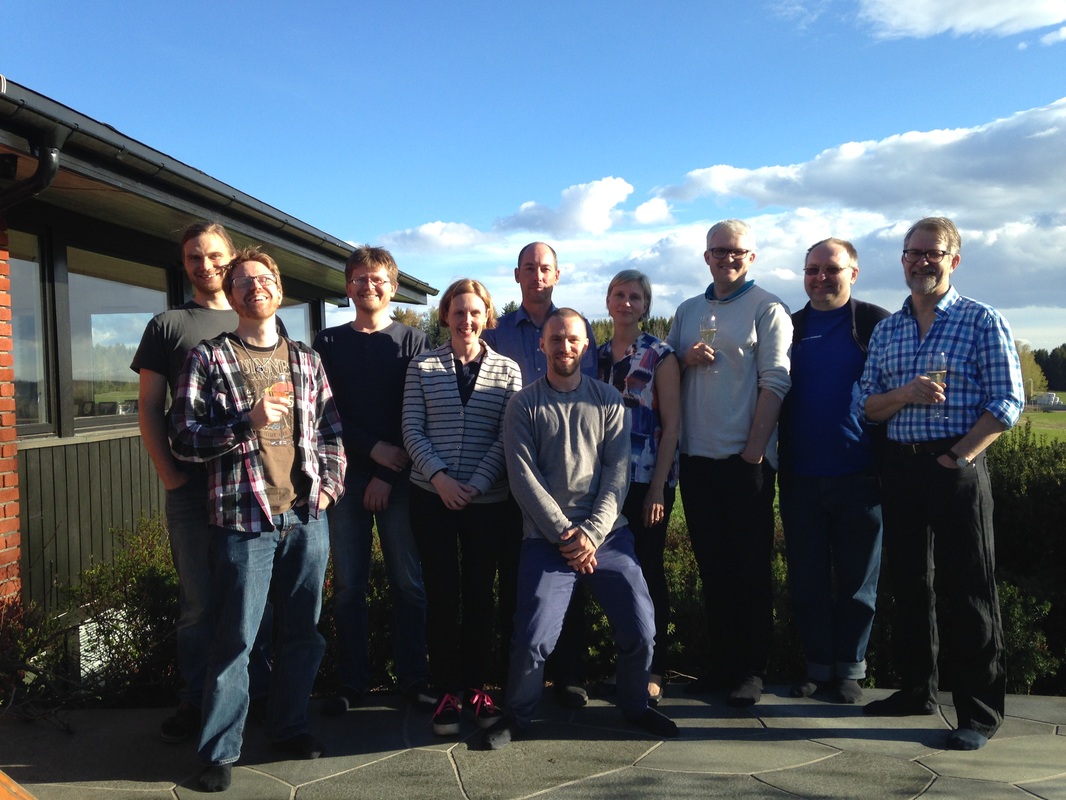 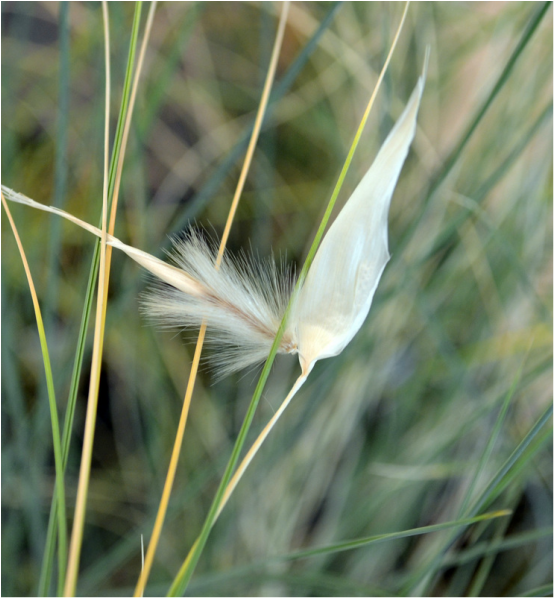 After two years and two chilling treatments, the basal pooid grass Lygeum spartum has actually flowered in our lab. However, curiously, it doesn't seem to be in response to vernalization.

Congratulations to Jinshun whose paper on the evolution of CYCLOIDEA genes in Lamiales was accepted in New Phytologist!

Stacy Jorgensen has successfully made the transition to graduate school at the University of Arizona, Tucson. But can she survive the heat?

The Preston lab project on the evolution of vernalization responsiveness in pooid grasses has been funded by the National Science Foundation!! We are now looking for a postdoc to take up the task. 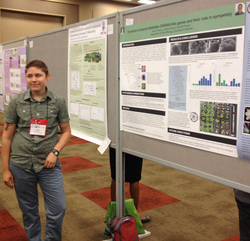 Beck Powers (left) and Meghan McKeown both received travel awards to attend the Botany 2014 conference in Boise, Idaho. Beck presented a poster on the role of HANABA TARANU genes in petunia and Meghan McKeown gave a talk on the evolution of vernalization responsiveness in pooid grasses.

Jill just got back from an NSF-funded R workshop at the Missouri Botanical Garden in St. Louis. If Ivan Jimenez and Sebastian Tello offer it again next year I'd definitely recommend it.

Congratulations to Sparsh Bhardwaj whose project on the effect of stimulants on pea plant growth won a silver medal at the South Burlington High School ISEF science fair!

We have just heard that our project on the evolution of photoperiod-regulated flowering in pooid grasses has been funded by the Norwegian Research Council!! This is a collaborative project between Siri Fjellheim (PI), Simen Sandve, Torgeir Hvidsten, and Sigbjorn Lien at the Norwegian University of Life Sciences, Jill Preston at the University of Vermont, and Ben Trevaskis at the Commonwealth Scientific and Industrial Research Organisation.