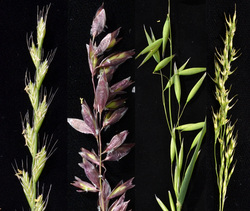 Overview. Over the last 50 million years the Earth has been in a cooling trend, leading to expansion of the northern and southern temperate zones, and creation of novel boreal zones. As a consequence, some organisms have evolved suites of adaptive traits to deal with decreasing temperatures that manifest on a seasonal, and sometimes long-term, basis. Given that they are anchored to the spot, plants in particular face major life history challenges with changing climate. A major focus of my lab is to determine the developmental and genetic mechanisms facilitating plant transitions from tropical to temperate regions, and to assess how constrained/labile these transitions are by studying the evolution of putatively adaptive “winter” traits. To do this, we are focusing on the large and economically important Pooideae subfamily of grasses; this group contains ~ 4,000 species, is the largest temperate group in the mostly tropical grass family, and included important crops such as oats, barley, wheat, and ryegrass.

Evolution of Flowering Time. Timing of flowering is critical to the maximization of plant fitness, with many taxa using both external (e.g. temperature) and internal (e.g. age) stimuli as markers of when to reproduce. In temperate regions, two major indicators of impending winter are decreasing daylength and decreasing temperatures. Although most temperate plant species flower during the warm months of late spring, summer, and early fall, many actually get ready to flower in late fall and winter. By counting the number of short and cold days, such plants are able to attain “reproductive competency” before favorable conditions arise, thus allowing them to flower immediately when conditions are good. This is akin to us buying our summer wardrobe in the winter sale so that we can immediately enjoy the warm weather in comfort.
To study the evolution of Pooideae flowering in response to short days and low temperatures (vernalization), my lab has been working in collaboration with the Fjellheim lab in Norway. We have so far found that (1) flowering competency in response to vernalization evolved early in the Pooideae subfamily, but the genetic pathway underlying this trait has subsequently been modified, (2) flowering competency in response to short days probably evolved more than once in Pooideae, and (3) flowering in response to long days evolved early in Pooideae, but has been followed by several transitions back to short day flowering in specific clades. We are now working on characterizing vernalization responsiveness more broadly in the grasses, and functionally testing the involvement of candidate genes in these developmental processes.
Projects are funded by the National Science Foundation (IOS 1353056 to JCP), USDA-HATCH, and the Research Council of Norway (231009 to SF).

Evolution of Cold Acclimation and Freezing Tolerance. Many temperate plants experience seasonal freezing conditions that can have adverse effects on growth and development through reduced enzyme activity, periodic drought, ice crystallization, and so on. Freezing tolerance, as opposed to avoidance, refers to a suite of traits (e.g. membrane alterations, ice recrystallization proteins) that allow species to combat the deleterious effects of freezing. However, since freezing tolerance can be energetically costly, many taxa deploy their freezing tolerance capabilities only during the winter. In these cases, freezing tolerance pathways are turned on when temperature and daylength decreases in the fall, a process known as cold acclimation.
To determine if cold acclimation and/or freezing tolerance traits evolved early in Pooideae, concomitant with their shift from the tropics to temperate regions, and whether these evolutionary origins were facilitated by preexisting stress tolerances, my lab is studying cold hardiness across the subfamily. So far we have found that (1) aspects of the Pooideae cold acclimation pathway evolved early in the group via recruitment of ancient stress response genes, but that (2) many lineage-specific changes have occurred, suggestive of multiple independent adjustments to an underlying cold acclimation network. Our focus now is to determine if the evolution of freezing tolerance traits have been facilitated by high drought tolerance in the grasses, how different the physiological responses are to drought and cold/freezing across Pooideae, and test the role of candidate genes in cold acclimation.
Projects are funded by the National Science Foundation (IOS 1353056 to JCP) and USDA-HATCH.

Fused petals have evolved multiple times within angiosperms and are hypothesized to be an important structural component for increased flower size and changes in flower symmetry. In the Asteridae clade of asterid core eudicots, sympetaly has been described as a key innovation. That is, a trait that has increased speciation rate, in this case possibly through the increased specialization of pollinators. In the free-petaled rosid Arabidopsis, and the fused-petaled asterid petunia (Petunia x hybrida), several genes have been characterized that control organ fusion and delimit organ boundaries. Based on these data, we are taking a candidate gene approach to elucidate the genetic basis of petal fusion in Asteridae, focusing on the early diverging asterid carnation (Dianthus caryophyllus), and the divergent Asteridae species lettuce (Lactuca sativa), gerbera, petunia, and tomato (Solanum lycopersicum).